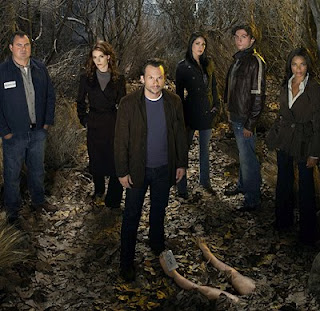 Wow...just wow! There aren't many series that grab me on the first episode and then leave me breathless at the end. 'the forgotten' is just such a show. Starring veteran actor Christian Slater as ex cop and now leader of the Forgotten Network for the Mideast, he leads a group of volunteers that take over where the cops leave off...finding the names of the unknown murders that happen and giving the families closure as well as the victims their names back.
With a great set of characters from a artist that gets community service for vandalism to a phone company employee that might be just a little too overzealous, the history of their lives is just as interesting as the cases themselves, but does no way take from the case at hand. Even Slater's character Alex has a reason for his obsession with the 'job' as his eight year old daughter has been kidnapped and missing for the last eight years.
Again, this is the first episode and as always I will wait to pass the most judgement until then. Still this is definitely one to check out, especially if you already watch the 'Dancing With the Stars' that run before. I hope to see it last and develop into a great series.
'the forgotten' airs Tuesdays on ABC at 10e/9c.
Watch the pilot online at http://abc.go.com/watch/the-forgotten/235186/235271/pilot
Posted by Chesh at 8:42 AM No comments: 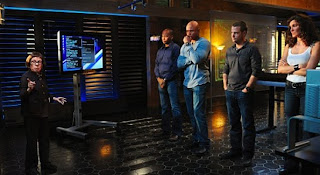 Everyone is familiar with NCIS and its crime solving crew that consists of Gibbs, Abby, and Ducky...to name a few. It's a show that brought the criminal solving to the military level, liken to JAG, but with a bit more of the gore we are use to seeing with the CSI's. The chemistry between characters is something that is just a wonder to behold and makes the show incredible to watch. This season I am sure will be no exception.
After the season premiere though last night, NCIS fans were introduced to a new series with a new crew and a new location, NCIS Los Angeles. Starring screen veterans Chris O'Donnell and LL Cool J, the pilot opened with a scene of G. Callen (O'Donnell) staring out into the ocean thinking on a flashback of him being shot next to his partner, Sam Hanna (Cool J). You find out later that he is coming back from a long leave, in which he needed to heal.
Their new headquarters reminded me of Angel's hotel from Whedon's hit series by the same name and I was surprised as well as pleased to see veteran actress Linda Hunt playing the support manager. An especially cute moment was when she asked G what the letter stood for. In which, Callen replies that 'they' being his foster home never told him.
As far as the series goes, I have only seen one episode and as anyone who is a regular reader knows, I don't pass too much judgement until I've seen a couple. My biggest thing with the new NCIS is it lacks the chemistry of the first. I was hooked by episode one and fell in love with the characters almost immediately. Still, though, as a watcher of all the CSI's, NY was the hardest for me to get into, but after awhile, I did finally grow to really like it.
Truthfully, Los Angeles will remain on my DVR and I will try again, seeing as they develop the characters as well as the story line that envelopes them. For you that didn't catch the pilot....go to http://www.cbs.com/primetime/ncis_los_angeles/?ttag=mktg;Fall09Google and watch it now.
NCIS Los Angeles airs on CBS on Tues @ 9e/8c.
Posted by Chesh at 1:58 PM 1 comment: 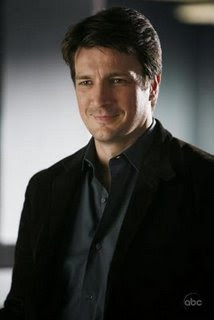 Well, tonight is the night that season two of Castle begins and am excited beyond measure. Maybe it's the fact I get to see the always sexy Nathan strutting his stuff on screen or that my brain gets a chance to solve a great murder mystery. Either way, I am hoping that it is as good as it was when it left off. Sitting pretty in its safe spot after Dancing With the Stars, I hope anyone that hasn't taken a bite will stay after and see what you are missing. Enjoy!! Castle airs tonight on ABC @ 10 east/ 7 west.
Season 2 trailer @ http://abc.go.com/shows/castle
Posted by Chesh at 2:34 PM No comments:

"Because Reality ain't nearly as fun."

Why I still read fairy Tales

"I aim to MISBEHAVE." Capt. Reynolds

Sometimes the only appropriate response to reality is to go insane.